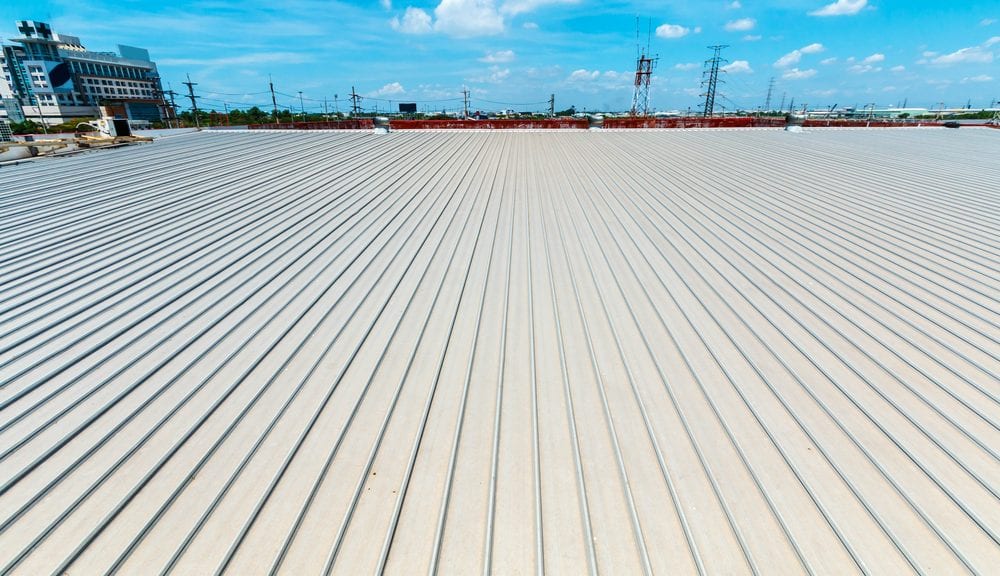 It’s tempting to start designing your commercial roof by choosing a color, but your roof’s appearance is just one of many things to factor into the color choice. White roofs and black roofs have vastly different properties, and are likewise more or less appropriate for your building depending on where you’re located and the local weather and temperatures.

There’s been a long-standing debate between black and white commercial roofs, but the environmental benefits of ‘exposed-membrane, low-slopping roofing systems with high solar reflectance and thermal emittance have already been well established by the Cool Roof Rating Council (CRRC). This means white roofs or roofing with white surfacing reduces the amount of solar radiation (heat) collected by roofing surfaces, lowering the amount of energy used to power cooling systems—and reduces contributions to global warming.

All that being said, you might immediately think, ‘then a white roof is best’ but there’s so much more to choosing between the two than that.

Why the color of your commercial roof matters

For those living in colder climates, having a white commercial roof could lead to higher heating costs. This is because the less heat your roof retains, the more you’ll need to rely on your heating system to warm the building. Another reason white roofs aren’t ideal for northern climates is because of the snow and ice. With a cooler roof, snow and ice is likelier to collect and build up, which can be problematic if you’re in an area that receives significant snowfall during the winter.

White roofs have a tendency to stay icy and snow covered for long periods of time, which can make maintenance of mechanical units dangerous or difficult. Ice and snow that lingers on white roofs also has a higher chance of sliding off of sloped roofs and causing damage.

The difference between white and black roofs

Black roofs are known for their ability to absorb a great amount of the Sun’s heat energy, which causes the roof surface to become extremely hot. They’re typically made out of rubber or EPDM roofing. White roofs on the other hand reflect most of the Sun’s heat energy, cooling the roof surface. White roofs are commonly constructed out of TPO or PVC. That means blacks roofs in the Northern USA might provide lower heat costs compared to buildings with white roofs in the North during winter; and white roofs stay cooler, potentially lower cooling costs in the summer.

Does that mean a black roof is ideal during the winter, and a white roof is better during the summer? Not necessarily.

Several other elements should be taken into account when determining roof color. Things like the building proportion, geography/climate, and the amount of insulation in the new/existing roof all need to be considered. Keeping the decision between black and white alone could be a costly mistake.

Generally speaking, matching the roof color to your climate will deliver the best results; but building proportion/roof surface ratio and the amount of insulation present can also affect energy efficiency, heat retention, etc. Speaking to a knowledgeable roofing contractor can ensure you make the best decision possible for your commercial building, so don’t hesitate to let us know how we can help you.